Working together to help homeless vets

“I was used to living on the streets and I really didn’t know how to live. It took me a while to really get used to it. I’m still trying to get adjusted to it.”

After he got his first apartment—the first ever lease in his own name—Michael would proudly show his keys around Minneapolis. 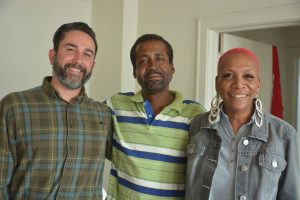 He boasted about his new home to those who had helped him at St. Stephens Outreach, and showed his shiny new keys to others where he ate his meals at Simpson Housing and to those at Catholic Charities who helped him finally find a home.

But he didn’t sleep in that one bedroom North Minneapolis apartment for three days, opting for the familiar bus stop that had been his closest thing to home for more than two decades.

“I was used to living on the streets and I really didn’t know how to live,” Michael explained. “It took me a while to really get used to it. I’m still trying to get adjusted to it.”

After more than two decades on the streets, Michael had developed a familiar routine. He knew a warm place to sleep in Loring Park when the temperatures plunged; he wasn’t often bothered when he slept at a bus stop on the corner of Lake Street and Lyndale Avenue.

He never stayed in shelters. Michael suffers from mental illness which was exasperated by close quarters, crowds, and chaos. The streets were familiar to him, and have been familiar since shortly after he left the military.

Michael served in the U.S. Army 1982 to 1986, working in medical supply, 86 Bravo. When he returned from the Army, his life took some twists and turns. He made decisions, some of which have had years of impact that he regrets.

“I got lost. I got to doing a lot of bad,” he said while looking down to the floor.

Thanks to a supportive community and organizations working together on his behalf, Michael is looking toward a positive future rather than lamenting the past.

While moving off the streets into a home was a major transition, Michael is thankful to have a place of his own and takes great pride in his home and achieving a long-term goal. He spent years saving money so that one day—when he was in his own home—he would be able to furnish it himself.

“I wanted to stand on my own two feet, I didn’t want anybody to help me. I said it do it myself, but Catholic Charities had my back. They did so much for me. I just can’t say enough,” he said.

Michael was able to buy himself a new bed, a kitchen table, and a purple and white couch and loveseat. His home is decorated with his artwork, wood boxes he built and drawings he created using a special tool to burn images into wood.

“I’m very good at art,” he said with a proud smile.

Michael has learned to accept help and is so thankful for those who have held him up, but his mom taught him to be a man and take care of himself the best he could.

His North Minneapolis apartment lets the sunshine in; it has big closets, and hardwood floors that make the sweet squeak of home. Thirteen pairs of shoes are laid out end-to-end in his bedroom.

“I kept them in a storage locker for 20 years. I don’t have to do that anymore,” he said.

After he moved into his apartment, Michael was able to work on new goals. He recently was hired to be a bell ringer for Salvation Army.

“This is such a great thing. I think I’ll be alright now. I just feel so good being here,” he said.