Minnesota has been a leader in welcoming refugees, and Catholic Charities was proud to be a long-standing part of this tradition. With the support of hundreds of individuals, parishes, and the broader faith community, Catholic Charities had successfully resettled refugees in Minnesota since World War II, including 24,000 since 1975; men, women, and families who had come from over 25 countries and have added to the depth and vibrancy of our community.

Due to restrictive federal policies limiting the number of refugees entering our country, we recently made the decision to close our refugee resettlement program. We know that “welcoming the stranger” is a key tenet of Catholic Social Teaching, and we did not make this decision lightly. Fortunately there are four other strong resettlement agencies in Minnesota, and we are hopeful that our exit will not reduce the number of refugees resettled to Minnesota. 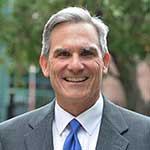 All the while, we will keep working, building and dreaming so that communities in Minnesota and around the country remain strong — so that this land, our land, remains a better, richer, fuller place for everyone — not just for the neighbors we already know, but for those we have also yet to meet.

Catholic Charities President and CEO Tim Marx co-authored “Why we defend—and still foster—the American Dream” for the Star Tribune as we made the difficult decision to close our refugee resettlement program.