Terry has a long and storied past, but now, with your support, she is focused on the future, her health and her happiness.

Terry, 55, came to Catholic Charities’ Higher Ground Saint Paul in the autumn of 2017. At first, she slept in the first floor shelter. She made friends, started to build a community, then worked toward a better day for herself and moved upstairs to Higher Ground Residence in 2018.

When she arrived at Higher Ground, Terry had recently lost a 20-year streak of sobriety and was struggling to regain mental health. Terry had lost everything—her home, her sobriety, her stability in one traumatic chain of events.

“If I’m not medicated, I’m not happy,” she said of her need for medication to keep her mental illness at bay.

Terry said her struggles with mental illness and alcoholism started when she was about 7-years-old. She first experienced homelessness when she was just 12-years-old. Despite the challenges and trauma of her childhood, Terry worked hard to build a life for herself and her children. Her childhood experiences, and her intelligence, led her to earn an associate’s degree in human services and a bachelor’s degree in sociology. Eventually, alcohol and mental illness took it all away.

When she had a home and medications that worked, her life worked. If her medications aren’t right, neither is her life.

“I went to the psych ward. I said: ‘I think I might want to put a gun to my head.’ My meds were messed up. I wasn’t doing too well when I was discharged. I flipped when they released me on the street. I was scared,” she said. 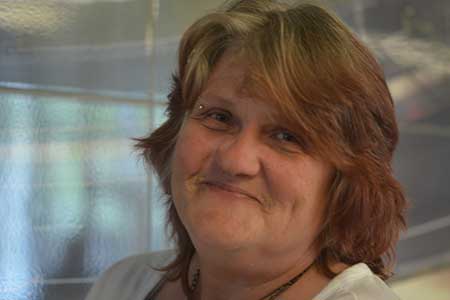 “I slept like a baby in the shelter. For the first time in decades, I was sleeping good,” she said. “When I walked in the shelter doors, the women hugged me and formed a circle around me.”

With a safe place to sleep, Terry was able to focus on her sobriety and her health. Working with Catholic Charities’ staff, she was able to get connected to resources. She joined Mile in My Shoes (MiMS) and goes running with a group of clients and community members every Tuesday and Thursday morning. Her run mentor, an area doctor, has become her primary care physician.

“Being a part of MiMS, I’ve had so many blessings just from that,” she said, talking about running six miles that morning.  “MiMS has just been this wonderful light in all of my darkness.”

While Terry plans to move into her own apartment in the future, she wants to make sure she is ready for the next step.  For now, she intends to keep working hard and counting her blessings, not her problems.

“I am proud of the fact that I’m sober again. God has really given me a couple of re-dos, but this time, he took me down to my knees,” she said. “I thank God every day for my sobriety. The 2.0 version of myself is a lot better.”