“I love this facility. These people actually do care about your kids. These are their kids as well. This is not just a childcare place. They go above and beyond for you.”

For Darcel and her two sons, Catholic Charities’ Northside Child Development Center is more than a childcare center. For Darcel, Northside represents family.

Her boys, Larry, 4 and Leelan, 2, have been coming to Northside since they were babies. She intends to keep them there until they age out of the program.

“I love this facility,” she said. “These people actually do care about your kids. These are their kids as well. This is not just a childcare place. They go above and beyond for you.”

Darcel has been a single mom since her boys lost their dad to gun violence two years ago.

“When their dad died, the people of Northside were there for us—not just the boys—but me too,” she said. “I do have a circle that builds love around us. You never expect to know how much love you have around you. I’m blessed.”

Darcel is working hard to make sure her boys live a positive, educated and peaceful life. Darcel and her sister were the first in their family to earn a high school diploma and pursue higher education. Her sister earned a master’s degree; Darcel went to school to be a medical assistant but now pays the bills as a driver for Metro Mobility. When the boys get older and her schedule permits, she plans to go back to school to pursue a nursing degree.

She wants her boys to go even further. 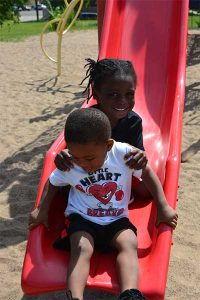 “I want them to get out of this, to do something bigger,” she said. “It’s not that I’m strong. I’m a parent. I’m a mother. There have been days where I didn’t want to get out of bed, but I have to stay positive for my kids. I need to be as hands on as I can now, that’s why I have to wait for nursing school.”

She believes the education Larry and Leelan are receiving at Northside is preparing them for their ‘something bigger.’

“When Larry came in before the age of one knowing his ABCs, that’s when I knew my baby boy was really learning something,” she said.

When it came time to choose a school for Larry, Darcel consulted with the team at Northside. Now, he’s entering kindergarten at Prodeo, a Minneapolis charter school focusing on high achievement. He’ll continue to attend Northside after school and in the summertime. His little brother Leelan is having fun while learning fundamentals in his toddler classroom at Northside.

Last year, when Larry proclaimed he was going to be a CEO when he grew up, Catholic Charities’ President and CEO Tim Marx took him under his wing for an afternoon and let him sit behind the big desk and even make a big decision—about snacks.

“He loved handing out his business cards,” Darcel laughed. “I really hope my kids actually do something with their lives. Northside is a good first step.”