Announcing Michael Goar as the next President & CEO of Catholic Charities

We are thrilled to announced that Michael Goar, currently the chief executive officer of Big Brothers Big Sisters Twin Cities, has been selected to succeed Tim Marx as the next president and chief executive officer of Catholic Charities of St. Paul and Minneapolis. Over the next several weeks Michael will transition from his current responsibilities and will assume his new position January 4, 2021. 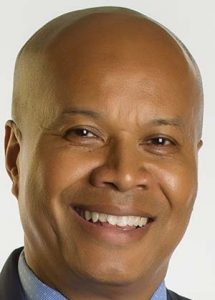 Prior to joining BBBS, Michael served as CEO and interim superintendent of Minneapolis Public Schools and as executive director of Generation Next, a Twin Cities-based youth development organization. Earlier in his career, Goar held executive positions and COO roles for both Boston Public Schools and Memphis City Schools, bringing strengths in complex financial structures.

A theme of Michael’s professional journey has been helping to lead foundational organizations that sustain and serve both their clients and the larger community. Throughout his career, he has led organizations through periods of change and disruption, through growth and retrenchment, seizing opportunities and mitigating challenges. Because of his experience, his grounding in the principles of Catholic Social Teaching and his commitment to racial equity and social justice, Michael is uniquely qualified to help lead us into our next decade and beyond.

Michael’s commitment to service is partly driven by his personal story. Born in South Korea, he came to the United States when he was adopted by a Minnesota family at age 12, an experience he describes as transformative. As he told the search committee, “As a bi-racial child in South Korea, especially one with a Black biological father, my educational and career options were limited; schooling was sporadic, bullying was ever-present and finding role models who looked like me was rare. Moving to Minnesota and becoming a U.S. citizen changed my life forever as I was now able to see possibilities I had never imagined before.”

“Catholic Charities is a pillar within this community and has a 150-year tradition of service that is a testament both to the strength of the organization’s commitment to Catholic Social Teaching and to the enduring depth of need,” said Goar. “Its mission inspires me, not just as a Christian but as someone who has been a beneficiary of these teachings. I am profoundly humbled and grateful for the opportunity to join this extraordinary team and to advocate for and serve the most vulnerable members of our community.”

Once Goar is on board, Marx will become Catholic Charities’ first President Emeritus with a focus on strategic projects.

“I am impressed with Michael’s passion and his grasp of the complex and dynamic environment in which service and social justice advocacy organizations like ours operate,” said Marx. “I’m delighted that he’ll be succeeding me, and I will do everything possible to make his transition seamless and successful.”

“I am grateful that Michael Goar has agreed to accept the challenge of leading Catholic Charities at this point in our history,” shared Archbishop Bernard Hebda. “For 150 years, Catholic Charities has offered an opportunity for members of this community to put our faith into action. It has been a privileged means for showing our support for Catholic social teaching and our belief that every human being is created in the image and likeness of God and worthy of dignity and respect regardless of faith, background or circumstance. I look forward to working with Michael as Catholic Charities continues its important ministry of building relationships rooted in fraternal love and a shared sense of justice.”

Michael’s selection is the result of months of work by our global search consultant, DHR International, and the executive search committee of the board led by Tom Arata. The process cast a wide net across the country: an initial pool of more than 1,000 potential candidates was narrowed to a group of more than 80 qualified and interested individuals. Ultimately, four semi-finalists advanced to the full search committee for consideration and Michael emerged as the unanimous choice from that review.

Our mission – to serve those most in need and to advocate for justice within our community – has never been more relevant. A strong and vital Catholic Charities that reaches across lines of politics, religion, geography, income and race will advance our vision of opportunity for everyone, poverty for no one. With the addition of Michael as our next president and CEO, we are more confident than ever that we will answer our call to service with focus, with creativity and with the joy of a struggle worth winning.

Please welcome Michael warmly and give him the support that he will need as he moves into his new role.