““Dorothy Day keeps me off the streets. I’m not saying I feel at home here, I just know everybody. There’s humor around here.” 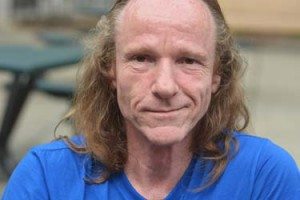 Saint Paul has always been Alen’s home, but he can’t find a place he can afford to live there.

He had a home, until his building was bought out to be transformed into a halfway house, leaving Alen once again on the hunt for affordable housing.

For now, the 54-year-old calls a mat on the floor of Catholic Charities’ Dorothy Day Center home—or at least the closest thing to it for now.

“Dorothy Day keeps me off the streets,” he said. “I’m not saying I feel at home here, I just know everybody. There’s humor around here.”

Although Alen sleeps at Dorothy Day Center, he also volunteers. He mops floors and puts down the mats each night. When he’s not volunteering or calling on his four children, he’s looking for a place to live. It is his mission in life right now.

“I’ve given myself two months to get out of here. I have got to find a place that’s on a bus line,” he said.

He’s gone as far as Little Canada and Albert Lea in search of housing, but hopes to live on West 7th Street in downtown Saint Paul. He wants to feel connected and be near family and friends he knows in his own community.

Alen suffers from epilepsy, has a nerve condition and has had operations on his neck and his legs.

“I’m not bedridden, but I can’t run up and down stairs like I used to,” he said.

His health conditions make him unable to work, but his disability check makes him unable to find a place to live in his hometown. He also worries landlords don’t want to take him because they worry about his medical needs.

“For my money, it’s hard to find a place,” he said. “I want to fend for myself, but with the physical thing there are just some things I can’t do for myself. I’m not giving up.”